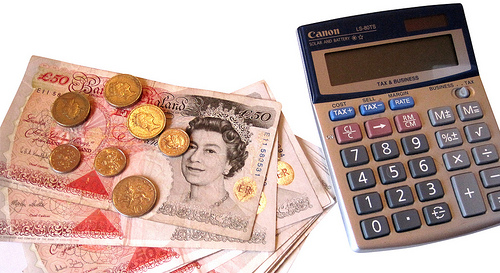 Please find below the accounts for the 2019-20 season. Expenditure was much lower than previous seasons because the Covid-19 pandemic resulted in no trophy or presentation night costs.

Please find below the accounts for the inactive 2020-21 season. Following the meeting on 11 August 2021, it was determined that the league should be wound up and the remaining funds have been split amongst the playing members. 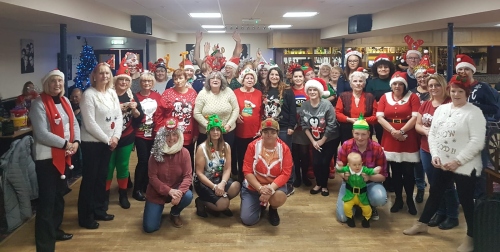 This year’s draw was held at the Ambleside with an amazing assortment of 75 prizes in the main draw, plus many more for the raffle and the ever-popular bingo.
Huge thanks to Kay Ford for all her hard work in buying, tagging and storing all the prizes – including building up some lovely hampers.

Thank you to everyone for coming to support the evening, especially those that put on their Christmas hats!

● There are no letters to be addressed
● The christmas draw tickets are to be given out tonight ~ Each player will be given 6 books, the team as a whole will be given an extra ten books to be sold to make up for the lost teams tickets.
● Anymore tickets wanted can be bought from trish.

● Has anyone had any ideas to make the christmas draw more entertaining this year ?
The christmas jumper competition was so successful last year, its been suggested a christmas hat competition could be held in its place.
● There will also be a disco / music and obviously the christmas raffle.

● The red Arrows were absent from todays meeting , A £10 fine will be incurred.
No further business to be discussed.

As recorded by Jan Goodwin.

* The minutes from the last meeting are read out and amended.
Proposed by Theresa S. Seconded by Jane S.

*The treasurer printout sheet was discussed..
Thank you Jane for your outstanding job .

*Teams discontinued this season are..
The rainbow trouts,
And the Leigh constitutional club.
That leaves 9 teams to carry the league on with.

* Nomination for this AGM meeting was Emma Perry.

*The naming of the league and the night its played on are to remain the same.

The new season has been declared open..

*Apologies from Mel for not being able to attend tonights meeting.

*It has been proposed that the committee should now consist of the captain of each team or a representative in their place ,
~ Along side that there is proposed to be a head table consisting of

That proposition was passed with the added delegation of several of the jobs that should and would make things run smoother on event nights and for the sake of the league and Janes sanity.

*Jane is to remain the treasurer with the added help of Hazel and other committee members.

*The previous fee of £10 per team & £2 per player has been changed to
£3 per player and no expense per team.

Proposals from the league treasurer to reduce costs due to the drop in players and teams this season.
* It was proposed that the following cups were retired..
The Draws cup
League consilation cup,
The P&E Draper memorial cup,
The Rose Stockwell memorial cup,

Those proposals were passed.

* It was also proposed that the Bullseye finish award / trophy was to be retired
That proposition was denied.

* All monies are now to be online transfers rather than cash in hand transactions,
If anyone is unsure how to do this Jane is happy to assist in any way she can.

* There will be a link created onto the website that leads you onto another site , this webpage lets you enter names of players at the cut off point of TWO weeks before the cup is to be played.
Any late entries will NOT be entered after the two week cut off period.

* Can the raffle prizes please be bettered than previous raffles..
These prizes should be a prize you yourself would want to win .

* Can each team please make extra effort to ask more of their players to chalk and check.. The same people should not be expected to cover every game all the time.

* All games are to be kept to monday evenings only .

* It has now been suggested that the following competitions can now be played later in the year.. The Singles, the Doubles, and finally the Triples.

Again of anyone is need of any help regarding any of the above proposals please dont hesitate to ask Trish or Jane.

Thank you all for a very positive meeting.

Photos from the night are now available

The chairperson opens meeting..
● Secretary reads the minutes from the league meeting on 8th jan.
● Proposed by Joanna Hammerton.
Seconded by Linda buckley.

Correspondance..
● There are two letters to be addressed..
1 ) One from the Lcc regarding the closure of the Lcc ladies darts team.
2) One from Jane Schroder regarding the help needed on the list of duties there are.

● Have you all ordered and paid for your presentation tickets for the 12th of july at the
Ambleside club ??
● Can everyone that has a trophy / cup from last year make sure they are handed back
dusted and intact please…
● It was proposed that registration fees and possibly other monies to be paid online .
Its safer and easier for all.
● A possble major rethink / restructure of the league has been suggested due to there only being 9 teams left playing in the league.

AOB
Things to discuss at the AGM…
If there is anything you want to be brought up / discussed at the AGM meeting pls let
Trish know by 1st of July.

● Raffle prizes ~ Can all raflle prizes on monday night league games be of an acceptable
standard at a suggested £2 each.. That way everybody’s raffles will be of the same
standards.
● Entrants for cup games… It has been asked if the league could possbily change the
rules, whereby if any player cannot play at any time ~ could the teams put another
playeres name forward instead.
As we dont have so many meetings now as we did before and cup games are drawn
well before they are played.. Can this please be discussed..
● For the presentation night there has been a DJ booked ~ thats on the 12th of july,
● Fish and chips to be confirmed and ordered on the Whatsapp group with Teresa
Swhwendener.
MEETING CLOSED @ 8.30pm.

On Monday night the Eagle Club hosted the captains, vice-captains and secretaries for their respective cup competitions.

Some excellent darts were thrown and all the finals went to 5 hard-fought legs.

The Tracey Golding Memorial Cup (Vice-Captains) was won by Val Salmon of Windermere who beat Angie Schulz of Flying Pockets.

Secretary’s Cup was won by Tracey Jones of Leigh Constitutional, who prevailed over Chris Stock of Misfits.

Thanks to all who came and supported.

Apologies from “The drifters” committee members for the no show tonight.

Thanks go out to all those who helped out ~ The night wouldn’t have gone as smoothly without you.

The new website is great ~  Thank you to Jane & Jilly .

Regarding the P & E Draper cup was last night,

the next round is on the 18th of February . Good luck for with that all.

Dates for your calendars,

The singles cup match is on the 17th of January,

The captains/vice captains/secretary cup is on the 28th of January,

Ideally each player or couples playing will have other non involved team members there for support ~ Its always nice to be supported.

Please DO NOT FORGET to bring your raffle prizes ( 2 £5 prizes ).

Also please make sure you are there no later than 7.45 PROMPTLY.

The next committee meeting is scheduled for the 4th of june.

Please do not forget your numbers & names for committee nominations ,

your presentation tickets and cash for those.

Can it be made clear by purchaser of tickets if the person that buys them is a member or guest because the tickets given are a different colour. for members and guests. 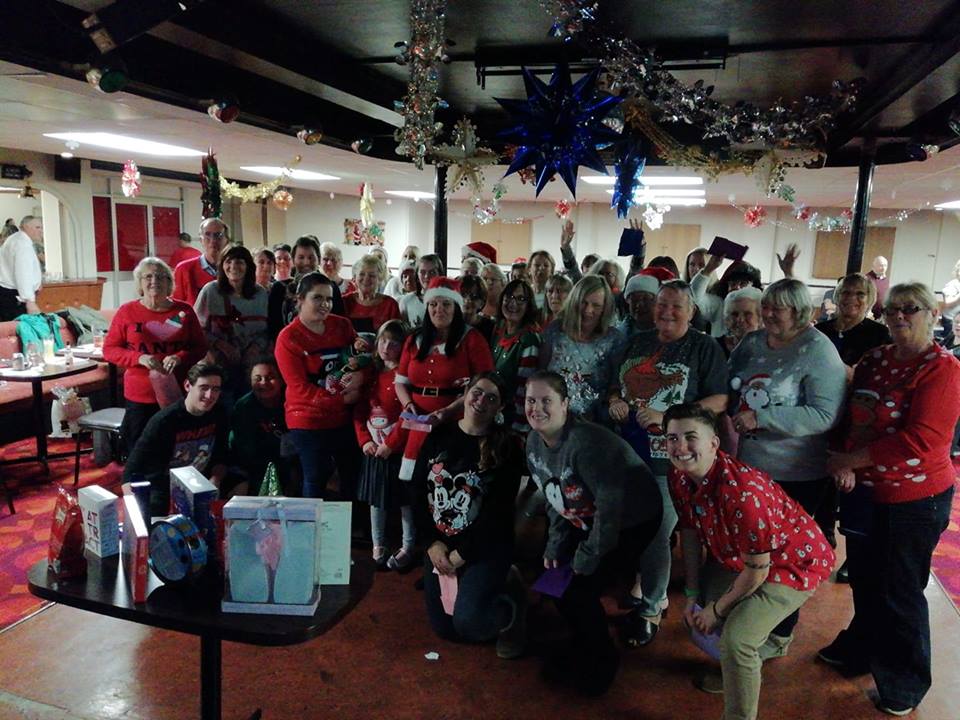 Our draw this year was held at the Eagle Club. Thanks as always to Kay Ford, whose hard work provided 67 prizes for the main draw. Kay also sourced all the prizes for the bingo and the raffle, which as usual was handled by the inimitable Sandra.

Thank you to everyone for coming to support the evening, especially those that put on their Christmassy outfits!

Scores on the doors